to be a bottomless source of love to them. But we use them in the same way. We demand of them

bottomless love and at least some service. Service and love. Sounds like a Sunday sermon. But I am

thought that something that I produce would be responsible for anything, but hell, why not. I’m pretty

responsible.) I would put emphasis on the bottomless part of the third sentence of this paragraph. Not

that we as parents are tried or that we don’t fail, but the expectation is there, that expectation that our

patience will not end. 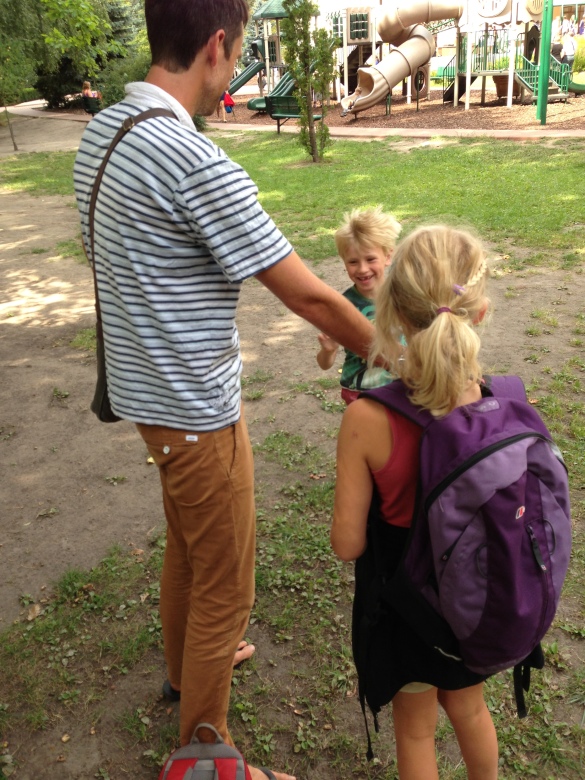 Parenting can make us all lose identity, but then they do things like this and you don’t care.

about 150 years ago, and since then the child’s need of a grownup’s love has increased. When kids

ceased being small adult they became vulnerable. And vulnerability needs a counterweight feeling in

order to be protected. That counterweight is love.

So we are connected to them by vulnerability and love. This is a good thing. Not that everyone sees the

same amount of vulnerability in their children, not does everyone have the opportunity to allow their

children to be vulnerable. Childhood is the prerogative of the rich. Not only the very rich, but the relative

rich, as well. The poor have more incentive to decrease childhood vulnerability as a way of coping with

I have a need to give my children space. I am frustrated by the fact that I have chosen to live a life that

does not provide them very much. As I have thought about this, I have come back to the idea of the

relationship between vulnerability and love. And I wonder if I have over compensated the love side

of the dialog to the detriment of the vulnerability. But I’ll be damned if I can come up with a situation

where I can create balance. So I keep thinking.

Perhaps I could argue that by giving them the life that I have, I have presented them with different

forums for expressing their vulnerability. With this I mean that by taking them away from one type

of childhood, a childhood shared by countless children and putting them into a childhood that differs

greatly from the vast majority of children, I am giving them perspective. That’s the point, anyway. That’s

why we’re here, because we believe that by doing this, we allow for vulnerability to be expressed in a

way that is different, but valid. Excuse me if I doubt this conclusion.

conflicts in one form or another. But he then goes on to argue that the city that he lives in is so diverse

that all assumptions take on the form of novelty, giving its citizens a sense of vitality that leads to

children. Damn, maybe I should just relax and enjoy the time I have with them. In a couple of years they

are going to hate me, not matter what I do any way.