The world is a classroom, as I am sure someone would say. No doubt about that. But what is this classroom trying to teach us? I have been thinking about this a lot recently because of the current events in Kyiv. These are heady days here, EUROREVOLUTION! Great opportunities to teach and be taught about the true meaning of democracy. 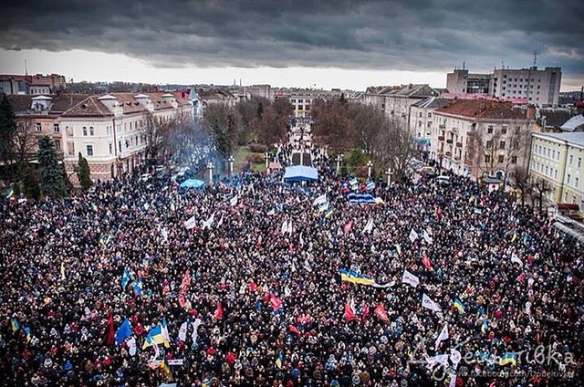 The revolution is here in Kyiv, Ukraine and it’s a great learning opportunity of democracy in practice for Pappa Goob and his kids.  Photo of 12/1/2013

All rights reserved by anagrudnyi  Check out his photostream, including amazing Ukrainian Revolution photos, on his Flickr.

And honestly I have felt much more threatened at demonstrations in other, more established, democracies than I have here. Here people aren’t trying to destroy the symbols of society, they are trying to get access to those symbols. The government has failed them and for the second time in the last 10 years, they want to hold someone accountable for that failure. Wow, awesome.

I think I have all the right in the world to be on the streets. Maybe not as a part, but as an observer. But should I have the kids with me? That’s a harder question. I see a lot of kids about, especially during the day, but these are Ukrainian kids, not my kids. What do I do if the police decide that they have had enough and start driving tanks through the crowd? Or if one of the fires that people have made to keep warm spreads and causes panic. What will my children have learned?

Does anyone have an opinion? What would you do? What is there to be gained? On the one hand it makes the whole thing about the relationship between the state and the people all the more clear. It provides the child with the feeling of being part of something more than just the little world in which they inhabit. I also think that it imparts a better, more sympathetic picture of the citizens of the country that we live in. They might be poor, but they are not dumb and they are not passive. (For example, as I walked through the crowd this morning, I saw three men with big trays of sandwiches that they were passing out to anyone that was hungry.)

One thought on “The World is a Classroom: Ukrainian Revolution Firsthand Account”