Approaches to survival and the ability to endure are determined by the realities that each of us face. – PapaGoob (January 25, 2013)

In my case, I had my first child when I was 23. She was conceived when my partner and I were living in a third country (she legally, I illegally). We then moved to her home country, Sweden, but not to her home town. In the following 8 years we had two more children, moved 4 times, I completed one education, then another. And now we are living in Kyiv, Ukraine, as diplomats and untouchables (not in the Indian “untouchable”-sense, but in the above-the-law-sense, I can literally do whatever I want without fear of reprisal or punishment). 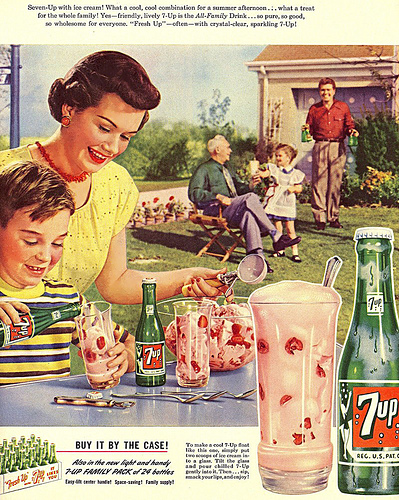 Ah… the good old days when there was no “co-parenting” there were clearly defined roles. Yes, I will have another gin and tonic dear, please put cherry 7up in it, just how I like it!

These details are not interesting to me (I know that some people think the details of their lives are interesting to themselves, but I am not one of them. Or maybe I am, I do like talking about myself when I have an audience or I don’t know what else to say. But then I always feel guilty afterward. This is my partners fault. She thinks I am a typical loud American male who doesn’t let anyone else get a word in edgewise. I think I am just jovial in certain situations. I digress).

The details are, however, the essence of a life and determine the prerequisites to my relationship to my children. That I was born in California and my wife was born in Western Sweden is also important. We, my partner and I, are the product of two very different parental philosophies. This despite the similarities between my upper-middle class Californian background and her middle class Swedish background.

Yet even if we had grown up in the same town, at the same time, and in the same socio-economic class, my partner and I would still be very different parents.

A generation ago, or maybe two, (or maybe even this is a reality to others of my own generation) this would not be a problem. The women were in charge of the home (including children) and the men were in charge of everything else (excluding children). But now we are all in charge of everything (and sometimes in our rush to have a career too, we let the childcare worker become the most important parent – but that’s another post) and that isn’t without its difficulties. In the end, it is the kids that win the most out of this experiment. I believe my children will have a better chance of being loving, happy, gentle and good adults if I play a positive, active, and equal parenting role, together with my partner. Despite the fact that this is significantly easier with a monarchy rather than a democracy, at home at least. These are my prerequisites and the stuff that my children’s future therapist will pay for their own children’s college education.

For students of history, they know that Ronald Reagan’s famous commercial in the 80’s titled “It’s morning in America again” was really veiled racism and what Donald Trump styled his whole Make America… blech…. We are all tired of hearing about how upsetting this week’s tragedy is, and I really want to find a way […]